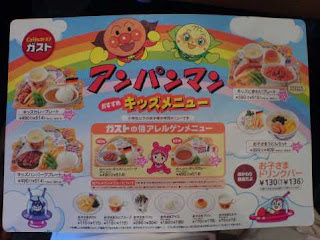 Anyone with kids in Japan knows about Anpanman, the young children's cartoon series where all the characters are different food items. I should devote an entire post to this in the future, but for now I would just like to note that Gusto Restaurants use Anpanman for their children's menu.