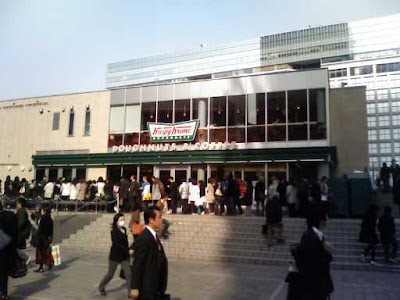 Krispy Kreme opened its first store in Japan in December 2006. I took the above picture at around 3 pm in front of the original Shinjuku location. Even at off times like this and a year and a half after it opened, there is still lines. I take this as an example of how susceptible Japanese people are to fads. I think this not because Krispy Kreme is doing well, but because there are still long lines in front of the stores and because people buy large boxes of donuts when they make it to the front of the line. I would never wait in a long line for a donut. I would even think twice about a short line. If I had to have a donut, there are other donut stores - lots of them.

A year and a half after it first opened, you cannot walk around Shinjuku without seeing people carrying large boxes of Krispy Kreme donuts. I see on the internet that they will open their 5th location later this week.

Even though I have lived in Japan a long time, I would have had my reservations about opening a Krispy Kreme here. Shows how little I know, I suppose. The marketing was good though, "the hugely popular American donut chain is finally coming to Japan!". The morning news shows all had segments about the opening.

When I first came to Japan, nothing tasted sweet to me because I was accustomed to the American degree of sweetness. Once I became accustomed to Japanese foods (or should I say foods available in Japan), foods in America started to seem sickeningly sweet (and greasy for that matter). You often hear Japanese say, even of foods sold in Japan, "that is too sweet". I rarely if ever hear that from Americans.

A good example is birthday cake in America, which I have heard many Japanese complain about - thick icing made of almost pure sugar.

I have read that other US donut chains half the amount of icing when they open shops in Japan (I don't know about Krispy Kreme).

Last Christmas in the US, my family and I visited a Krispy Kreme for the first time. I thought the donuts were good, especially when hot - too sweet, but that goes without saying. The reaction of my children surprised me though. They did not finish their donuts, saying that they were too sweet. Then after seeing how the donuts are made - basically a bread and fat mixture deep fried and then dipped in pure sugar - my kids said it was interesting but disgusting and they didn't want to go back again. That reaction surprised even me. I thought children would adapt to the US degree of sweetness more quickly than that. Can't say I was unhappy with that response though.

This sounds like I am going on an anti-Krispy Kreme campaign, which is really not my intent, but I do think it is a good example both of fads in Japan and how hard it can be to predict what will be popular in Japan.
Posted by Food Science Japan at 01:00 No comments: