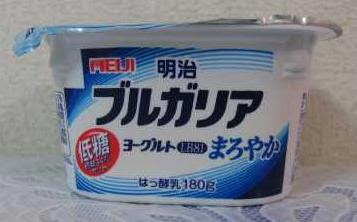 Bulgarian Sumo wrestler Kotooshu became the first European to win a major sumo tournament or basho. It was big news here in Japan and good news for the sumo association, coming after two years of scandal and generally unfavorable publicity.

This has a direct relation to the food industry, because Kotooshu is sponsored by Meiji Dairies Corporation which makes Japan's best selling yogurt brand - Bulgaria Yogurt. The name is interesting enough, but as is written on the package the brand is "Licensed by Bulgaria". This is the only case I know of where a country licenses its name for a commercial product.

If you follow the 2nd link below, you can see Kotooshu's ceremonial belt or Kesho-musubi, which doubles an advertisement for the yogurt.

Bulgaria Yogurt has been the best selling yogurt in Japan for decades, long before Kotooshu came to Japan. The brand image is that of a traditional and healthy yogurt coming from a country known for its yogurt eating traditions and long, healthy life spans. The product was introduced at the 1970 World Expo, around the same time Bulgarians were known for their long life scans. Recent statistics inspire less envy, but the positive image for Bulgaria remains.
Here is Kotooshu's Wikipedia page:

Here is a link to the Meiji Dairies' Kotooshu webpage: http://www.meijibulgariayogurt.com/koto/index.html

Here is a link to a Bulgaria yogurt commercial featuring Kotooshu (video): http://www.meinyu.jp/fun/cm/product/movie/burugaria_002.wmv

Posted by Food Science Japan at 17:50 No comments: