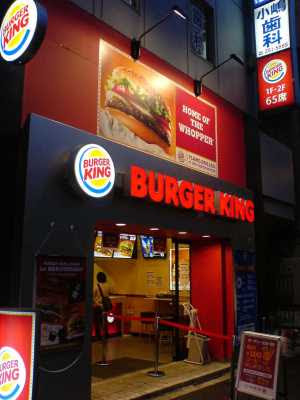 Burger King was in Japan from 1996 to 2001, but reportedly could not compete with McDonald's in a price war. I also heard at the time that there were marketing disagreements with partners and people in different parts of the company. Even if that was not true, it made sense to me at the time. The offerings were largely the same as in the US, where you forget about calories and focus on size and strong taste.

Personally, I thought that the Burger King taste was the main problem, even though I like it myself. Burger King sandwiches have a strong meaty taste and aroma which is not common in Japan. This is in contrast with McDonald's sandwiches which are much milder in this respect.

Now they are back for another try. They only have 6 locations so far - all in Tokyo. Japanese tastes have been changing over the years, so maybe Japan is ready for Burger King now. Recently monster-size burgers at McDonald's and other chains have been popular, so the size of Burger King's sandwiches might prove to be popular.
This time around, Burger King Japan opened its first store on June 8, 2007 and therefore is now celebrating its one year anniversary. Good Luck.
Posted by Food Science Japan at 01:00 No comments: