How about some Sushi and Guinness? 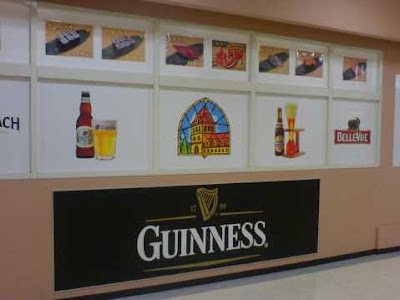 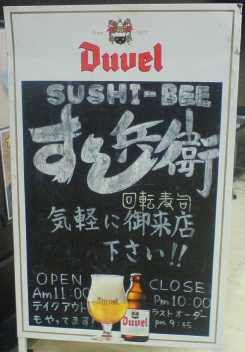 There is a nice kaiten (or conveyor belt) sushi bar in Odawara City Mall which boasts a collection of the world's best beers. It is called Sushi-Bee (or Bay's Table) in English and すし兵衛 in Japanese (http://www.sushibee.com/).
Not only is there a nice selection of European beers, but there are also wines and Japanese sake and shochu. Faux German beer hall wallpaper which along with the ornamental beer taps give the place some atmosphere. And most importantly, the sushi is pretty good.

As with all keiten sushi restaurants, the prices are indicated by the plate colors. Aside form the Japanese-Western mix, it does seem a little odd to have fine beers and wines (slow dinning) paired with keiten sushi which is a high turnover concept. 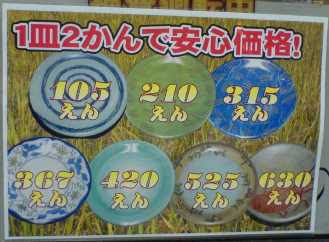 There is some English displayed on the wall almost as decoration. "The concepts of our menu are arranged widely for young to generation." and "Delicious sushi dishes in good place, with kindly service is our basic." I think I get the idea.

My interest is more on the production end of things, so I will try not to stray into food criticism.
One reason I am writing about this restaurant is because it seems like a good example of how many traditions are more firmly adhered to outside the country of origin.

The kaiten sushi restaurants I have seen outside Japan stick pretty close to the basic sushi lineup. In Japan, the kaiten sushi restaurants always have sushi, of course, but they also offer, on the same conveyor belts, just about everything else the customer might want: tempura, fried chicken nuggets, fruits, desserts, canned drinks, etc. I have even seen burgers and sandwiches making the rounds.
Posted by Food Science Japan at 14:12 No comments: